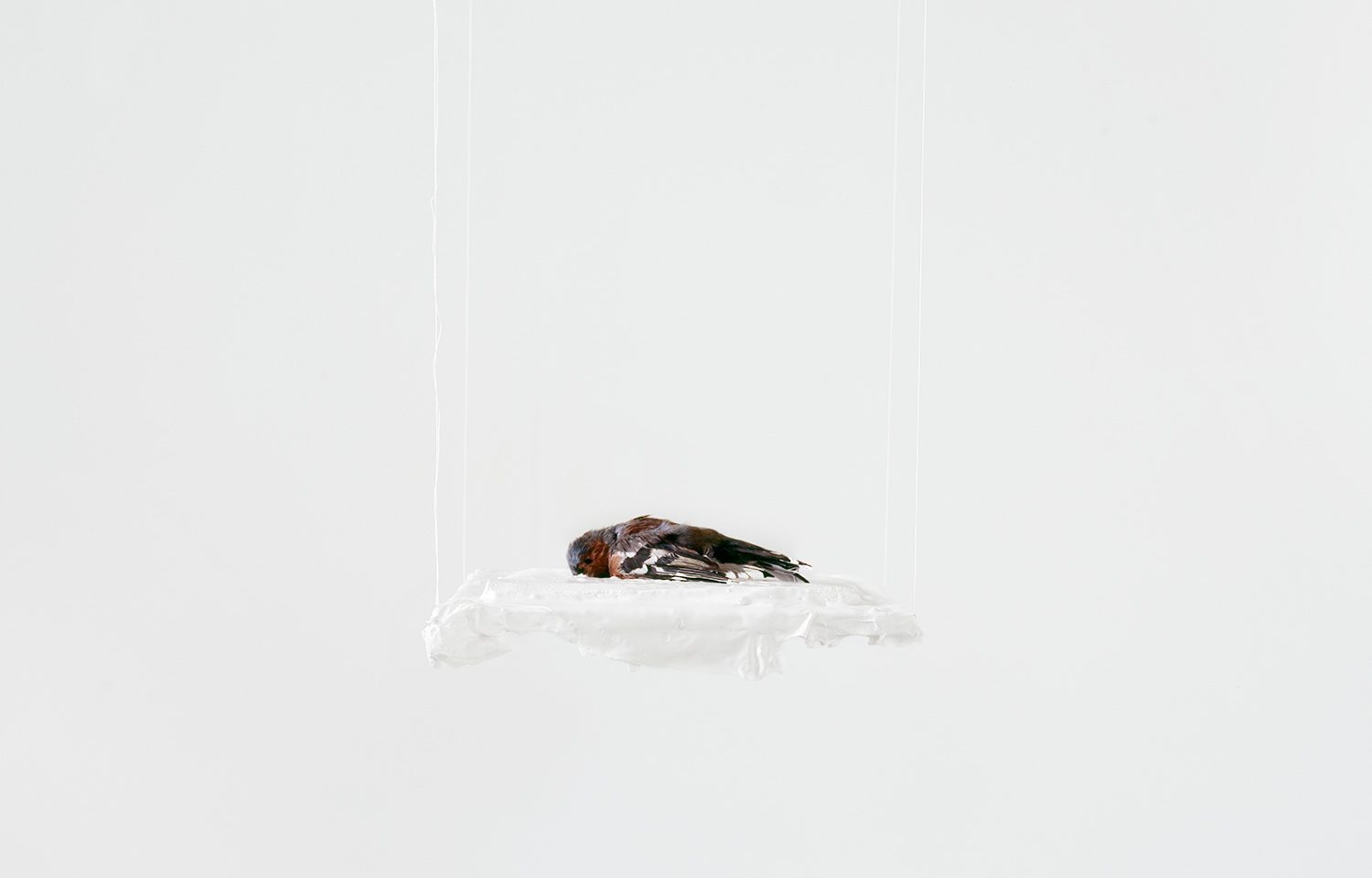 Death suspends the relation to place,even though the deceased rests heavily in his spot as if upon the only basis that is left to him.To be precise,this basis lacks,the place is missing,the corpse is not in its place.Where is it? It is not here,and yet it is not anywhere else.Nowhere? But then nowhere is here.

In his seminal essay on the image,Maurice Blanchot points to a corner of a room and wonders whether one cannot experience this space aesthetically,that is,to abandon ourselves to what we see2. This example of unmediated experience provides a way in to the quiet,yet overwhelming resonance of place in the work of Axel Antas.Although, obviously, his work is media- based,it explicitly comes out of an experience of place – be it a Scandinavian sauna, a snow-covered field, a sun-drenched lawn or pine forest – but one in which,inAntas’work,a very precise kind of action takes place.In some works this action is constituted by a manufactured puff of smoke,fingers drawing on condensation,snow-angels,blowing up white balloons until your head disappears.In others,the drawings mainly,it is more dead-pan:dead-birds,prone figures,a figure standing under a tree,a tree standing upside down,a pile of clothes,some clothes hanging in branches.What is happening cannot be seen. Nothing seems to be happening.These works move towards a degree zero of action,a situation in which what is left of the subject is its most abstract characteristic:merely existing (da zu sein) and thereby already committing an outrage3.In the sense in whichAntas’subjects are,like the cadaver,somewhere between being and nothingness,something invisible,not unlike the idea of the soul leaving the body (as an activity),is present.

The Surrealist broken object, the tool which is no longer useful once defective,may,in this after-life of use,return as image.A double life of sorts emerges.Blanchot spatializes this time of after in terms of a remove which is not simply a displacement, but a distance which is in the heart of the thing5.Like the cadaver, the broken object provides a key to the ungraspable in the image,as manifestation of the appearance of disappearance,the return of what does not come back6. It is you, but it is not you.

NOT DOING NOTHING:THE PLACE OF THE CADAVER

For Blanchot,(t)he place someone dies is not an indifferent spot7, and thus the registration of object and place are inextricably linked.The Dead Birds series of small life-sized drawings inhabit a white space which retains its presence both materially, as paper,and as the primary creative space,as carte blanche. The white space which is so crucial toAntas’multi-disciplinary practice is not dissimilar to the black space from which the Absurdist writer Samuel Beckett draws his reality.Arguably neither entirely detached from the matter of experience, nor a purely philosophical realm,this is perhaps where the unspeakable may be murmured and the ineffable rendered visible,if at its own strange distance.ForAdorno,Beckett’s advance over existential philosophy lies in its refusal to translate the meaninglessness of absurdity into a meaning for existence by keeping our focus on the particular and the material8.This melancholic tendency to examine the human condition from a low point,from the ground level of material and detritus,is core toAntas’work to date.Antas,however,renders the spiritual aspect of melancholia present through the vehicle of the subject (as body) as cadaver, conflating the still life with the performative. Despite vast differences in size, the relative white space in Dead Birds is kept consistent in two other series’, the ongoing Absentees and the more recent Tree Structures.In each of the large Absentees works,a drawing of a figure – one who resembles the artist- lies in variously prone positions towards the bottom of a field of whiteness.For the viewer,the projective space which is provided is one of imagined abscondance.As much as they as idling away time, daydreaming etc., they are also somehow empty,dead.The figures,like the cadaver are suspended metaphysically, neither here nor there.To be absent is to be elsewhere.To be absent is to be registered as such somewhere you are not. Blanchot develops the ‘neither/nor’ around the axes of ambiguity:

Here what speaks in the name of the image“sometimes”still speaks of the world,and“sometimes”introduces us into the undetermined milieu of fascination.“Sometimes it gives us the power to control things in their absence and through fiction, thus maintaining us in a domain rich with meaning;but“sometimes”it removes us to where things are perhaps present, but in their image, and where the image is passivity, where it has no value either signicative or affective, but is the passion of indifference.(9)

The Absentees are not elsewhere doing something they shouldn’t; they are elsewhere- this much is certain- but the outrage is in what they are – actively, almost adamantly- not doing; which is almost anything at all.

ON NOT REGISTERING: PRESENCE AND REPETITION

It is the fantasy of merging,albeit often absurdly,with nature which links Antas’practice with that of the performative works of the late Dutch artist Bas Jan Ader. By enacting a particular effete pose in response to a machismo of physical activity – lounging,crying,playing,daydreaming- the human condition is dealt with corporeally,but in a way that manifests itself minimally.A Scandinavian,Antas is evidently influenced by the habitat of his formative years.It was no surprise to discover that Ader himself in fact produced work in Sweden: a slide- projected self-portrait in a pinewood forest (Untitled (Sweden) 1971).This registration of body and nature of developed in Antas’series of drawings,Tree Structures.The tree structure is simultaneously covered and marked (drawn) out by items of clothing which are strewn across the branches; the tree is at the same time present and absent,as is the body.In a sense both and neither are present.

The repetition of the subject – a male who always resembles the artist10 – throughout the work, does the opposite of reinforcing the subject (as romantic or existential individual); rather it dissipates the subject, in a sense displacing it across the works as a body, undermining the unity of subject.Where, for Adorno, Beckett’s characters are empty personae, truly mere masks, through whom sound merely passes11, in Antas’work, repetition reduces the subject to a vessel,in essence,to more white space.

For Ader a series of linked projects led to his actual disappearance at sea. For Antas the future is still another open space,more room for play.The early photographic works Breathing Himself Invisible (2001) and White Portrait (2002) all hang on the premise/precipice of a gentle annihilation of self. It is easy to overlook the violence Antas so gently layers into the work and which is in fact fairly uncompromising. It is about the relationship of the body to itself as both a physical and a thoughtful vessel,which is also enacted by others in the video works Silent Conversations (2001) and Snowangels (2000),and also by a smoke-machine in the new work Formations Echoed (2005).But this vessel is also empty,It presence effects in the viewer the production of more space.

The history of drawing has maintained a lightness which painting has not; thus it is that for Antas drawing is at the heart of all his work,both practically and conceptually.Drawing as a discipline allies itself with thought, as much with the incidental or the note as with more sustained argument12. Perhaps drawing has within it the capacity for a kind of indifference to history which allows it a more unencumbered space.Whether it is in his nature or out of vigilance,there is without a doubt a lightness inAntas’work,both of touch and of thought.The weight of his practice comes from within each discreet work, in its melancholia,as well as across his oeuvre,in its meditative consistency.The work delivers to us, as much as us to, a space in which meaning is suspended, wherein the world abandons it (and the viewer) to idleness13;to a wonderful,if temporary,absence from the relentlessness of productivity, and from the daily Register,during which one must raise one’s hand or clock in, and in so doing declare one as unquestionably present.